Iceland is situated in the North Atlantic Ocean and it is the second largest island of Europe. The Island has a total area of 103,100 square kilometers. Icland has a population of about 348,000. More than a half of the Icelanders live in the region of the capital Reykjavik. The Icelandic flag is blue with a red cross outlined in white extending to the edges of the flag. A symbol of country and nation. The colors are symbols of the country's nature: Blue sky, white ice-caps and the red fire underneath. 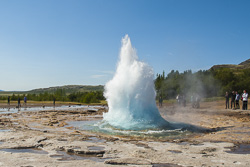 This website provides information on Iceland, e.g. about the land, people, history and geology. Further you’ll find a travel guide and travel deals as well as a large photo gallery with pictures from Iceland, Greenland and the Faroe Islands.